Odds and Entries at XPACE 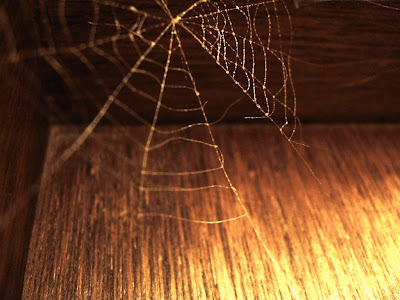 I wrote the exhibition text for this fantastic show opening tonight at XPACE. The show-- of work by Toronto's Tongue and Groove Collective-- involves the installation of sculptural interventions in an elaborate cluster of found drawers. Here is some information about the show:
Odds and Entries
Tongue and Groove Collective
November 12-December 11, 2010
Reception: November 12th, 7pm
XPACE Cultural Centre/XBASE
58 Ossington Avenue
Toronto
Simon Black, Kailey Bryan, Robert Clements, Maggie Flynn, Jeanette Hicks, Brian Hobbs, Meghan Scott and Tasha Turner
Worn, unwanted and left for the landfill, fifteen dressers and cabinets have been hoarded in XBASE. Granted a second chance, these drawers no longer passively house socks and employee files. They are stacked, leaned and fastened to each other. In the basement space they take over, free to be explored. The collaborating artists inhabit these sliding spaces creating relationships between the drawers and those who visit them.
More info about the show can be found here.
Odds and Entries
Exhibition Text

When I was eight years old, I had a friend named Sandra. One day she came to my house to play. Within minutes of arriving, she pulled a see-through plastic take-out container out of her pink shoulder bag. “This is my kit,” she told me. Inside the container were the following items: a folded-up tissue, a length of green string, three maple keys, a black marble, a cut-out photograph of a overflowing basket of apples from a magazine, a tiny fabric doll and a Ritz cracker. I remember being jealous of Sandra’s kit. I tried to make one of my own, but it didn’t work out. There was something about hers-- maybe the way the tissue was folded, creating the perfect little bed for the doll-- that made it better, and far more alive than mine.

When I was nineteen years old, I moved into my second apartment on Maynard Avenue in Parkdale. It was an eight-story apartment building, and most of its tenants were over fifty. After moving my things into the unit’s smaller bedroom on my first night there, I decided to start hanging my clothes in the closet. As I was preparing to fold my freshly-purchased-and-unused towels (organized by the colours of the rainbow, of course) and put them on the top shelf of the closet, I noticed something red pushed to the very back corner of the shelf. I jumped to grab for it, and upon realizing what it was, my heart jumped out of my chest. I threw it back onto the shelf and slammed the door shut. The object was a used, strappy red high heel shoe. It may as well have been a dismembered limb. Later that night, I got my boyfriend to retrieve the shoe and throw it away.

These stories attest to the potency of objects. We connect with used and found everyday objects because of the traces of human life they contain. While we consume images, facts, and pseudo-facts in abundance on a daily basis, the voiceless, tangible stuff of everyday life contains the real truth or our existence but lacks the means to tell it. In an age of infinite information, are the secret lives of objects one of the last facets of our lives that have not been laid bare?

In the exhibition Odds and Entries, objects of ambiguous origin are contained in a series of salvaged drawers. Some of the interventions are as subtle as whispers—one drawer’s interior is adorned with a single spider web made of human hair, simultaneously evoking a sense of intimate human presence, desolation and loss. Another drawer contains a surreal, illuminated campground dreamscape, and another a forest of rotating cocktail umbrellas. While one drawer alludes to a pointedly domestic space, the others feel like strange and fantastical hybrids of space that is public and private, indoor and outdoor, sensual as well as mechanical. Another drawer plays with the idea of bodily detritus, attraction and repulsion, but to a more absurd and suggestive end.

Odds and Entries, like the closet with the red shoe and Sandra’s kit, involve containment as a way of isolating objects in order to give them new meaning. Situating work in repositories associated with the domestic realm-- as well as the exhibition’s emphasis on organic discovery-- defies conventions of gallery display and arrangement. The fact that the installation is situated in a raw, subterranean space further defies such conventions, while hinting at the role of our subconscious as a guide through the objects we encounter. Most importantly, the work presents us with objects and environments shrouded in ambiguity. While we can never know the true histories of the objects we happen upon by chance, we can lose ourselves in their mystery and meditate on their impact. In doing so, we not only allow ourselves to see the hidden life in inanimate objects, but can gain insight into our own lives and the lives of others.

Image: Kailey Bryan
Posted by Tara Bursey at 8:46 AM