I Can't Stop This Feeling: Crisis, Comfort and Craft at MKG 127 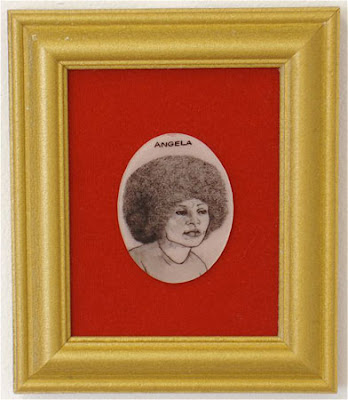 I realize this exhibition ended over a week ago, but I finished writing this last night (on a plane!) and thought it was still worth posting. Sorry if it gets a little ramble-y towards the middle...evidently I take pleasure in discussing my various childhood traumas...!

Fittingly, I finished reading the book The Ice Storm the morning I went to see I Can’t Stop This Feeling: Crisis, Comfort and Craft by Hamilton artist’s collective Shake-N-Make at MKG127 Gallery.  Both the book and the exhibition examine the culture of the early-to-mid 70s, in which the horrors of Vietnam, the political turmoil of Watergate and Summer of Love fallout spawned a culture of mass-confusion, compromised values and blatant escapism.  More specifically, while the book alludes to the subliminal effects of economic and social collapse on children and young adults, the exhibition explores the aesthetics of the period with reference to both pop culture and domestic realms. 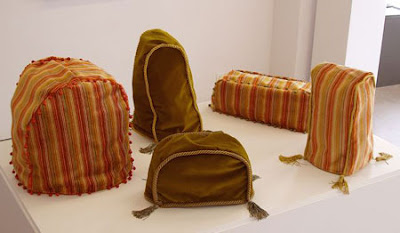 Crisis, Comfort and Craft indulges us in all the comforts of one of history’s most uncomfortable decades.  Itchy-soft macramé plant holders, tasseled velour soft sculptures and smolderingly sensuous images of rich comfort foods greet one upon entering the exhibition.  In Family Time, images of T.V. families are embroidered in bright primaries, making everyone from Laverne and Shirley to Rerun from What’s Happening look like Ronald McDonald, or like angular connect-the-dots depictions done in bright Laurentian pencil crayons.  Similarly, the portraits of VIP Gallery pay tribute to T.V. idols of the day (Hawkeye!  Farrah!) while juxtaposing them with prominent figures from the political frontlines.  Angela Davis, Pierre Trudeau, and even “Tricky Dick” Nixon himself makes an appearance. In the centre of the room, minimal wedge-shaped soft sculptures look like a cross between kitchen appliance cozies and sad little ghosts drained of their spook, decorated with tacky tassels and trim.  Displayed prominently on the rear wall of the gallery are Search and Destroy I and II, emblazoned with the iconic silhouettes of Charlie’s Angels and KISS, which upon closer inspection betrays exactly how much work and patience must have gone into their decorative details. 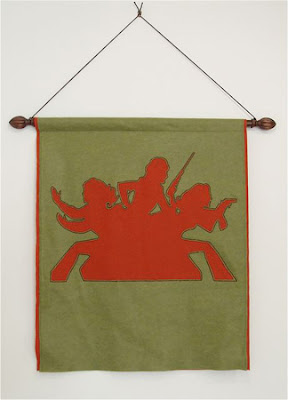 Amidst all of the celluloid heroes, plush objects and eye candy in this exhibition, one might ask themselves “ok…I see craft, but where is said crisis?”  In one recent review on AKIMBO, one critic penned his subtly dismissive take on the work featured (almost understandably, considering the plethora of local artists who have built careers riffing on 70s pop culture…), claiming to “reject such icons with the ire of a lapsed Catholic.” In asking this question, I am reminded of a detail from my own childhood that has stayed with me for then last twenty years.  During the last recession in the early 90s, I was of elementary school age.  Like The Ice Storm’s Wendy Hood, I too immersed myself from 4pm after school in the T.V. shows of the day- solitary viewings of Who’s the Boss, Married with Children and Growing Pains were all on my nightly prime time agenda.  I was an anxious kid (and still am), and because of this suffered with bouts of insomnia around this time.  A related symptom of this insomnia was at seven-o-clock each weeknight I would be stricken with waves of nausea that would coincide with certain commercials, each of which all featured incredibly catchy, syrupy-sweet jingles.  Molly McButter, Gillette (“The best a man can get!” sung in an assured baritone) and “bubbly, bubbly bubbly Eno!” are three that I remember as though I heard them yesterday.  Such jingles signaled the last leg of prime-time programming, impending bedtime, and dreaded solitude.  The piercing silence that comes after nightly prayers, the sound of emptiness save for the clicking of the alarm clock after midnight.  Darkness.  The aggressive cheeriness of an antacid commercial couldn’t help the knowledge that night was approaching like it couldn’t help my parents with the mortgage payments or stop them from fighting, it wouldn’t make school bearable, silence CNN’s deafening coverage of the Gulf War, or end the war for that matter.  The works in Comfort, Crisis and Craft, like the saccharine advertisements of my childhood, aren’t so much icons of an era as they are accessories of futile escape.  After the T.V. and radio are turned off, the world keeps on turning…nothing can stop it. 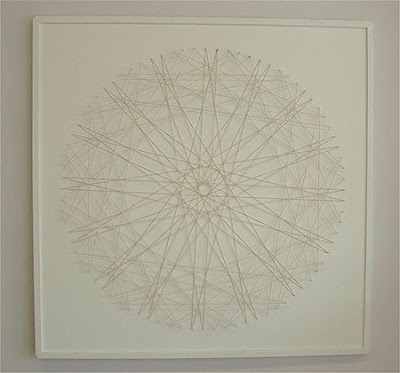 Outside of the fact that the early 70s was the heyday of the arts and crafts revival, the key to the role of crafts and crafting, and their relationship to “crisis” lies in the piece TM (Transcendental Meditation), included in the exhibition.  This work alludes to the inherently transcendental, meditative nature of craft such as macramé, crochet, string art and other processes that involve repetitive actions.  These sorts of activities result in a similarly engrossing (and possibly longer lasting) type of hypnotic state/anesthesia often associated with television.  TM, with it’s white on white string pattern resembling a spyrograph or astrological chart, evoking both baroque pattern and empty space, reminds us of the proactive nature of craft as a vehicle for many things- escape, enjoyment, adornment, potentially social, and most certainly personal change.