Living at the Movies 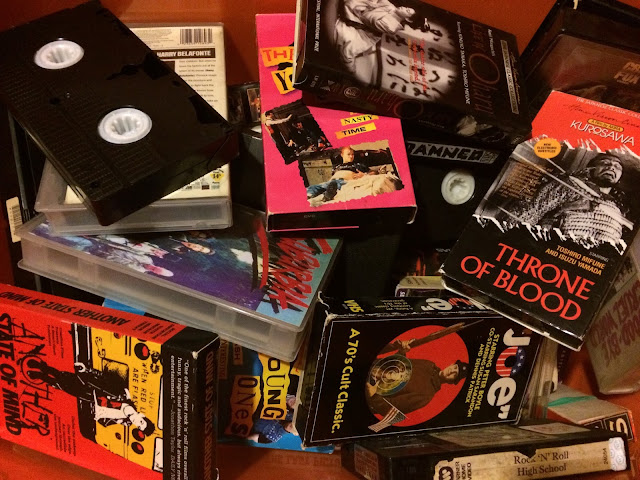 This is a piece that I wrote for Critical Superbeast that didn't make it onto the blog. I wanted it to see the light of day, so here it is-- some of my thoughts around old media, and the proliferation of VHS movie nights in Hamilton as of late. Read on and use the comment section if you have thoughts to share or add.

I dreamt up, and have been recycling, this line lately: “Vinyl records have been gentrified.” Indie, punk and fringe music kept vinyl manufacturing going when it was in doldrums at the dawn of the 1990s. For the last few years, news outlets have been claiming that vinyl is BACK, IF YOU CAN BELIEVE IT.  Now, the Beatles’ back catalogue and Adele records are being pressed on vinyl, causing a bottleneck in production out of what few record-pressing plants exist today. Small quantities equal lower priority and longer waits for small-scale releases to see the light of day. As a consumer, the landscape has changed too. Gone are the days of the dollar bin. 2016 is the year of the $40 reissue, not the $4 bargain.

What do such conditions mean for the weirdos whose life’s blood is to see oddball production, whether they created it or not, see the light of day? We don’t just exhume the media graveyard for fun; we do it out of neccessity. For many of us, the humble audio cassette has recently become a cultural lifebuoy.

Perhaps this same impulse has informed the proliferation of VHS film screening nights in Hamilton. At least three currently exist— one celebrates the trashy bowels of cinematic experience, mostly horror, while one is dedicated to punk rockers on celluloid. I went to one two nights ago, a private version which identified as a “secret film screening society of sorts” in an unassuming location on Rebecca Street. A motley group of seven, we sat in a room watching a curated pair of films selected with the theme “Trump’s America” in mind: The Stepford Wives (1974) and George A. Romero’s zombie prototype, The Crazies (1974). In The Stepford Wives, a feminist wife and mother tries to resist the local men’s association’s plot to turn all of the town’s women into baking, scrubbing, glossy-eyed, submissive cyborgs. In the lesser-known The Crazies, a biological warfare tool— a virus called Trixie— unleashes an epidemic of rage across swing state Pensylvannia as a small group of insurgents struggles to not succumb to one of two things: the sickness, or the trigger-happy army that is trying to keep citizens, whether stricken with madness or sane, in line. Sound familiar?

Why VHS? Tape hiss, packaging and charming tracking issues—aspects of VHS’ unique visual and aural vocabulary now only known through the twice-removed simulacra of Youtube— are all possibilities. It is tempting to question whether their slowness— the fact that we can’t surf, binge or replay a VHS with the ease of a Youtube video—adds to the formality and intensity of our reception of them. But I refuse to believe that it’s simply a matter of novelty, or an infatuation with the old or obsolete.

The late, great Jim Carroll’s first poetry collection was called Living at the Movies. I always imagined that Living at the Movies was Carroll’s metaphor for escapism. Some might suggest that the impulse to exhume and appropriate old technologies, and the media they contain, is a way to escape the dauntingly rapid change of contemporary technological change…either that, or it might be dismissed as knee-jerk nostalgia. In a world that often feels like a runaway train racing towards oblivion, it’s hard to deny the comfort I experience when I revisit the first media— cassettes, vinyl records and VHS tapes— I experienced as a child. But as with audio cassette tape being a safe haven in a gentrified media landscape,  perhaps old VHS tapes carrying weird and wonderful films from past decades might hint at another interpretation of what it might mean to live at the movies.

In the 1970s twilight of my cinematic dreamscape— the space of Rocky’s lonely night walks past flaming garbage cans or DiNiro’s night ride through Manhattan in his cologne and cigarette-stenched cab— the movies, like a bus station or a 24-hour diner, is a place where someone with nowhere else to go can spend the night and fade into the background, unnoticed. When we live with and embrace the media of the past, we carve out a space for our own imagination, presence, culture and difference. Through it, we live in a movie, or a eutopian space, that draws from the past to talk about the present. This eutopia is a place where misfit media can continue to be vessels for misfit stories-- perhaps a more political act than any humble secret film screening society in the name of good fun might guess.
Posted by Tara Bursey at 9:37 PM No comments:

The Mending Lounge at Craft Ontario 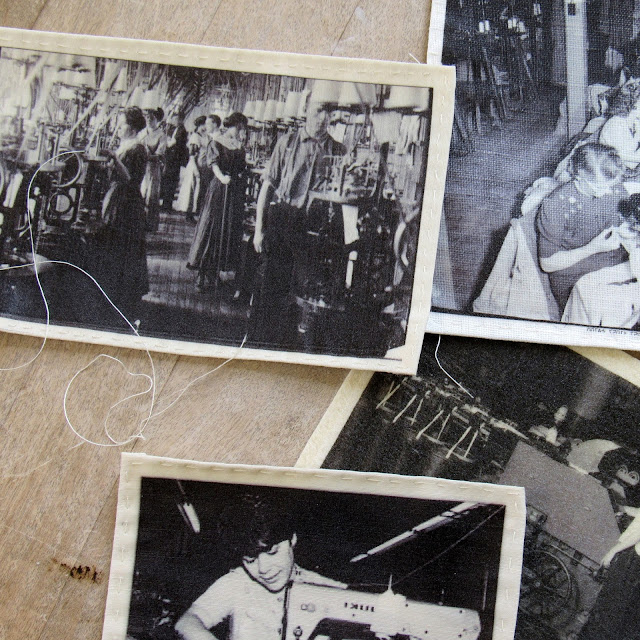 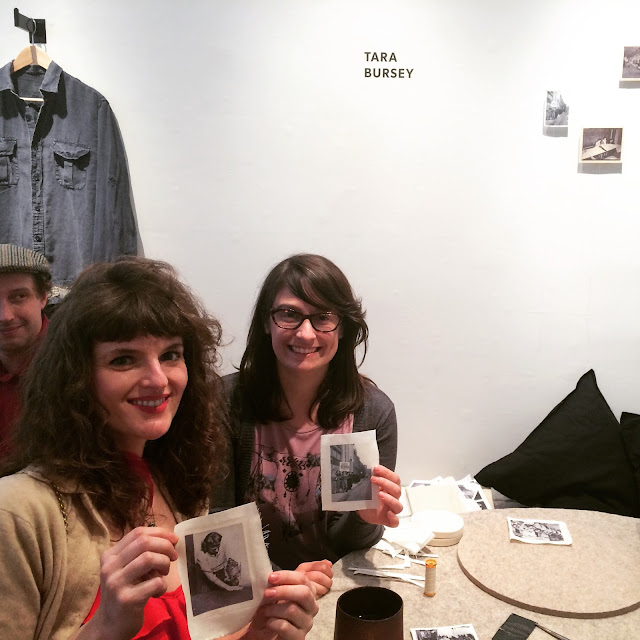 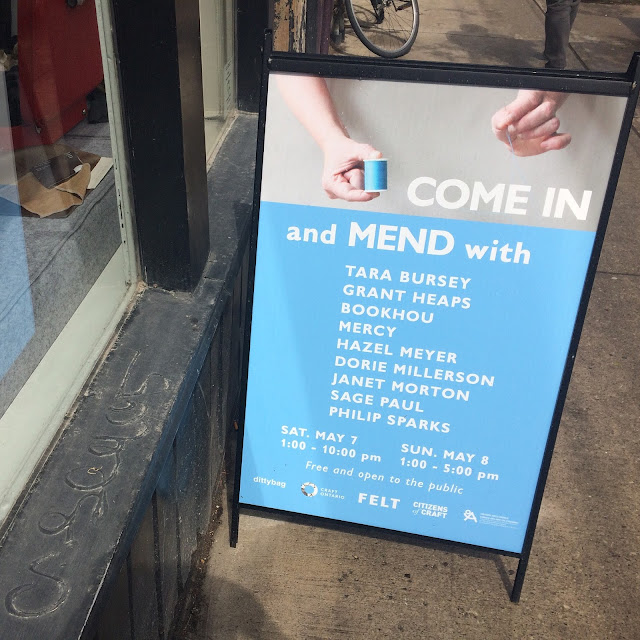 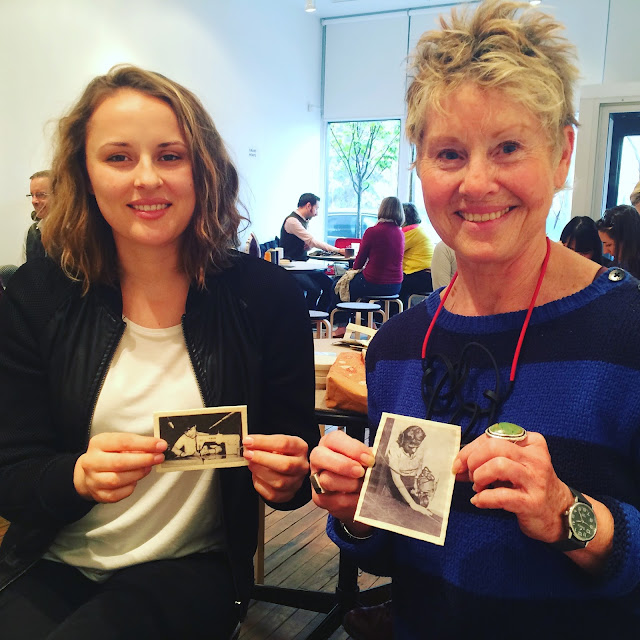 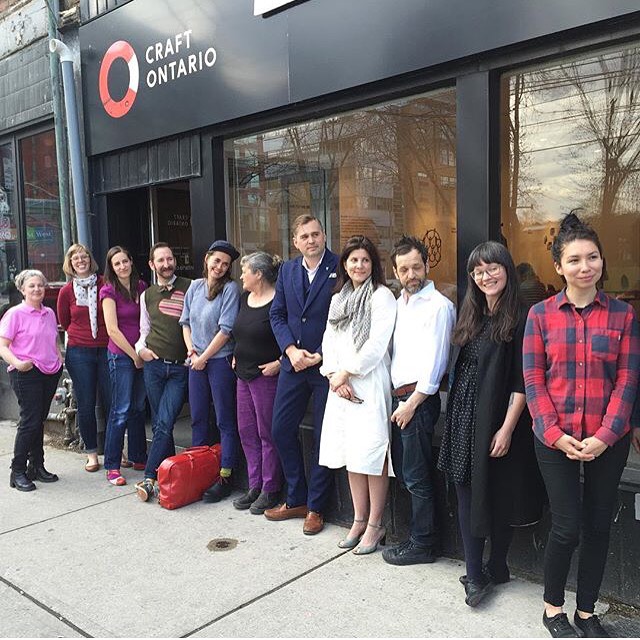 New documentation up on my website of the project I contributed to The Mending Lounge this past spring at Craft Ontario. Check it out here: http://www.tara-bursey.com/recent/
Posted by Tara Bursey at 10:40 PM No comments: 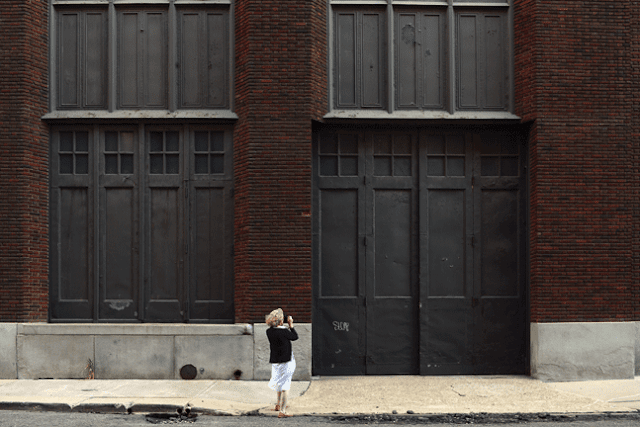 I am resurrecting this blog with the announcement of Critical Superbeast, a blog of art criticism put together by a collective of artists, writers and administrators in Hamilton, Ontario. Stay tuned for my post about Trisha Leigh Lavoie's exhibition at hundreddollargallery The Comfort Bureau next week.

Critical Superbeast is a collaborative art writing and publishing project seeking to actively de-stigmatize the act of being critical. While firmly rooted in a sense of place, content is not strictly focused on the Hamilton area. Contributors are encouraged to take a broad geographic view, to constellate cultural production in Hamilton within a greater contemporary context, and to challenge the opposition of centre versus periphery in arts discourse.

On The Waterfront at Hamilton Winterfest 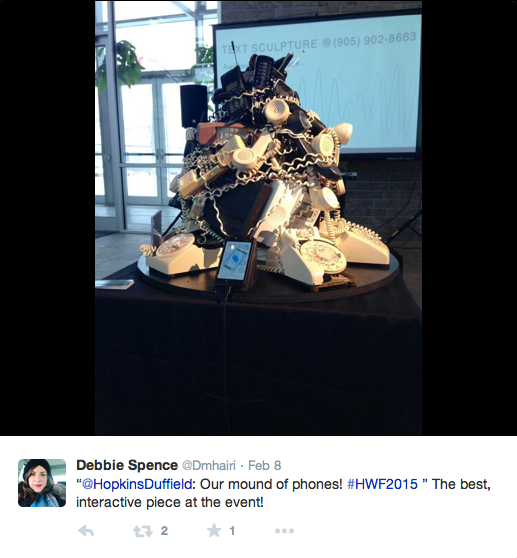 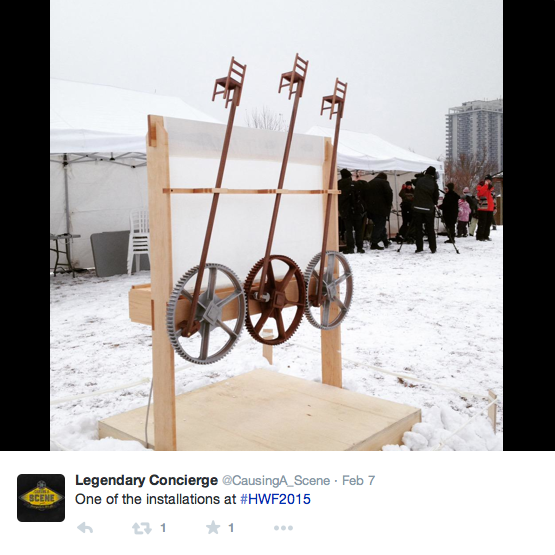 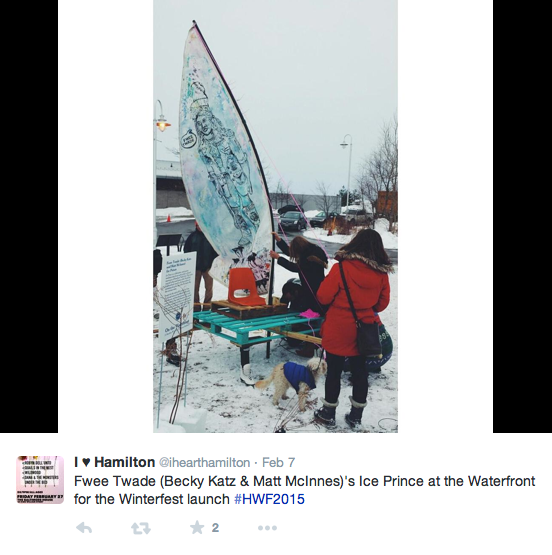 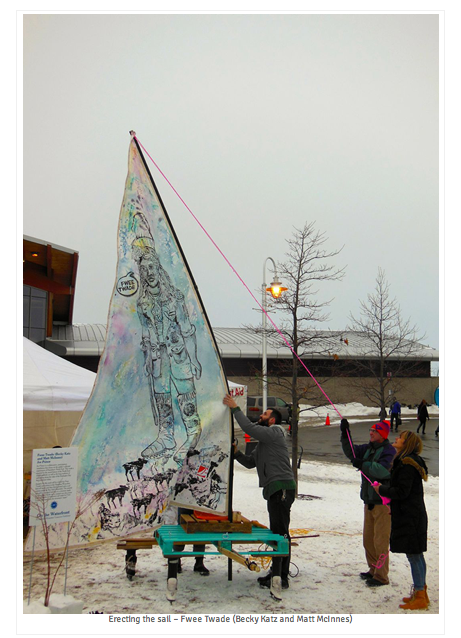 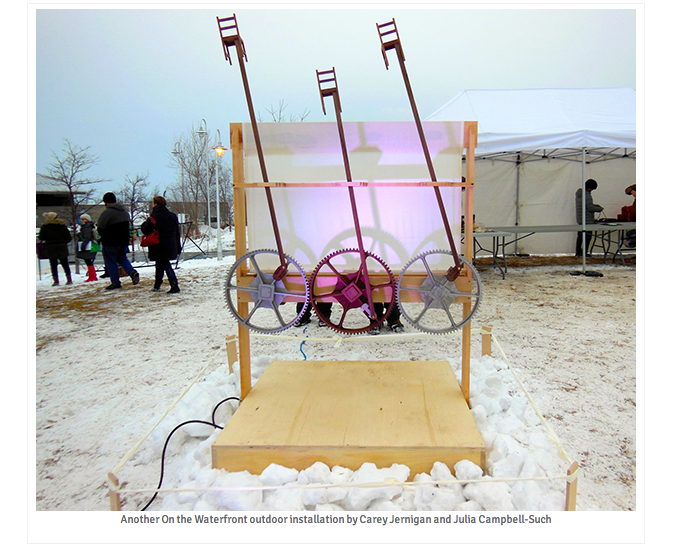 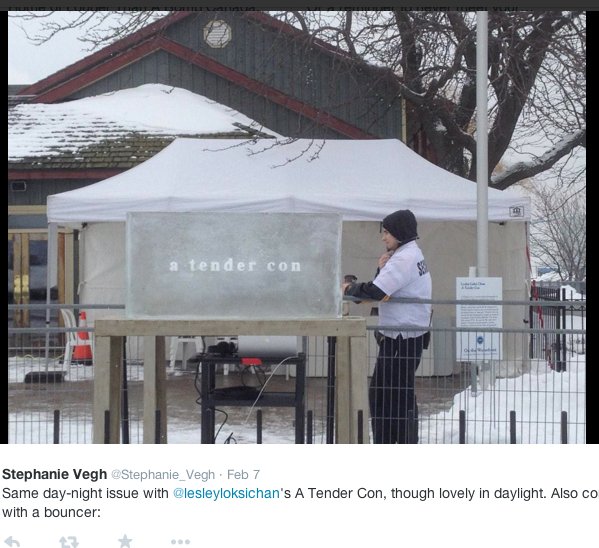 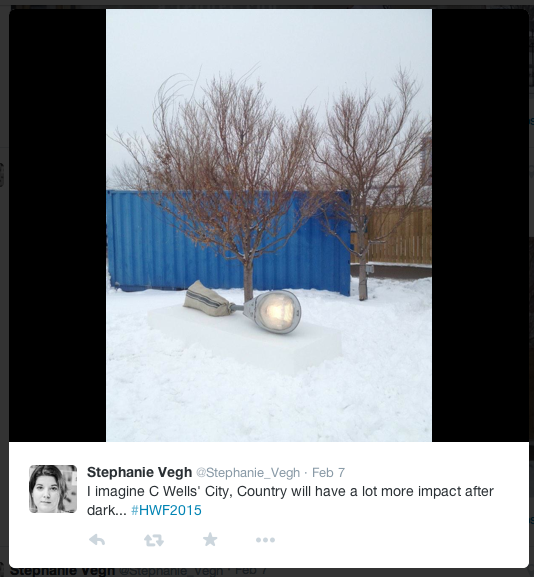 On The Waterfront happened and wrapped only one short day ago. Main documentation to come soon, but here are some fun snaps taken by others found on Twitter.
Posted by Tara Bursey at 11:35 PM No comments: 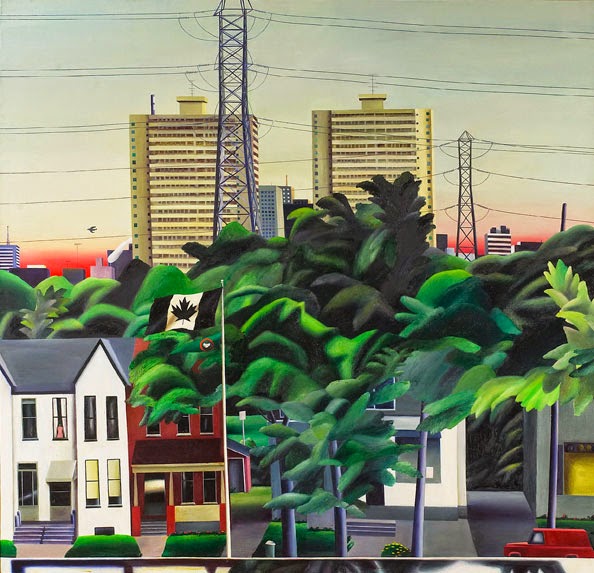 Christiane Pflug, With the Black Flag, 1971 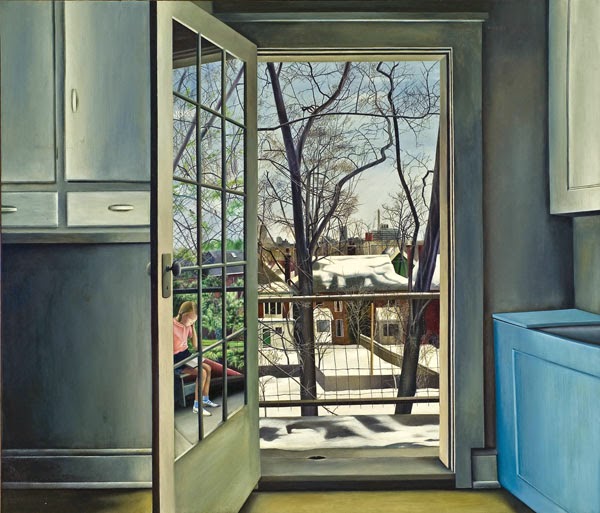 I saw a photo today of the inside of the AGO and was reminded of a painting I saw there from their permanent collection a few years ago that I really loved. After a bit of research, I found that the artist's name is Christiane Pflug and the painting is called With the Black Flag.

Even though the painting was done in 1971, it really reminds me of what the city looked like through my eyes as a child, maybe about 15 years later. While the Victorian houses in the foreground are generally associated with the central core of the city (Pflug lived her last years in an apartment near Summerhill Station), the high rises and hydro poles feel quintessentially Scarberian. The unsettling stiffness of the trees, the red sky, and of course the black flag give off a emanate an undercurrent of anxiety and foreboding. This feeling is only made worse by what appears to be a second flag emblazoned with the Elmer the Saftey Elephant logo...the stuff of childhood nightmares!

A little more research revealed that Christiane Pflug committed suicide at 35 on the beach at Hanlan's Point, which partially explains the mood of her paintings. I really enjoy both of these, and am interested in learning more about her.

The End in the Spectator 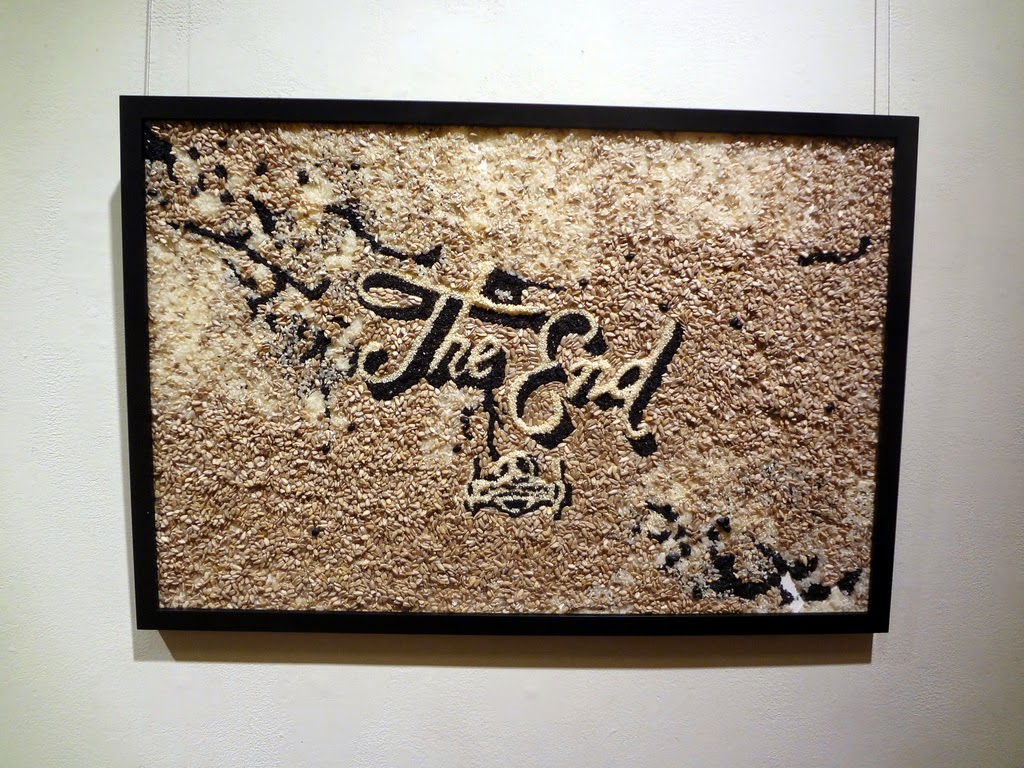 Nice mention of my piece The End (Evelyn Prentice) in the Hamilton Spectator today, in both the Spec print paper and website. Thanks to Spec art critic Regina Haggo for the mention in her review of the Invitational exhibition at you me gallery, which is up for another week or so. The closing reception and informal artist's talks will take place on Sunday, February 8th at 2 pm for those who are interested.

Read the review for yourself here: http://www.thespec.com/whatson-story/5295130-an-inviting-exhibition/
Posted by Tara Bursey at 10:33 PM No comments: 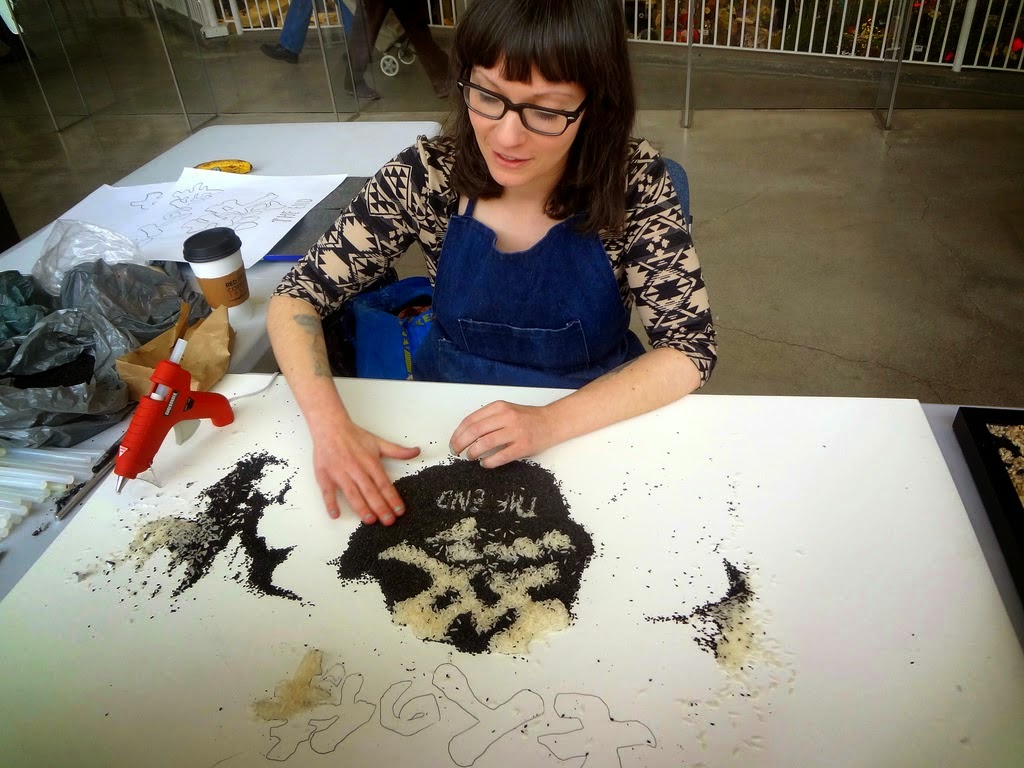 I made a new website over the Winter Holidays.

This website is different from my last because while it has a small archive of artwork, it focuses more on my curatorial projects. While I'm still doing a few final tweeks, you may find it here: http://www.tara-bursey.com
Posted by Tara Bursey at 10:00 AM No comments: